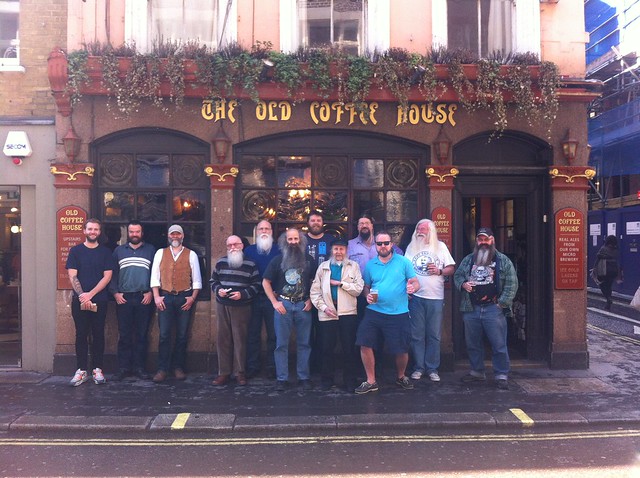 A word from Del our Organizer:-

On Saturday 16 May, the Capital Beards will be assembling in the Old Coffee House, Beak Street, Soho for drinks, a meal and convivial conversation. For those of you with those new-fangled satnavs, the postcode is W1F 9SF. As will come to no surprise to those that know me, despite its name, this is a pub and not a coffee house – more about this later. You probably have your own favourite ways of accessing Soho, but the nearest tube station to the pub is Oxford Circus. Sadly, I am again unable to join in with the festivities; missing two meetings on the trot due to unavoidable clashes is barely forgivable. I shall do better in future.

Anyway, if you are interested in a bit about the pub, read on. If you feel life is too short, the article following this is really interesting. For both of you who are still with me, I would like to take you back to Shakespearian times (see, you should have moved on to the next article!). Shakespeare wrote Measure for Measure and All’s Well That Ends Well in rented accommodation in Silver Street Soho. That building – along with a few others – was trashed during the Great Fire in 1666. In 1680, Queen Ann’s messenger Thomas Beake, who also moonlighted as a property developer “acquired” most of Silver Street and being a courtier, he was a typical shrinking violet, so he renamed the street after himself. I have no idea when the premises became a Coffee House, but in 1772, number 49 Beak Street was licensed as a public house under the more historic name of the Silver Street Coffee House. The property was rebuilt and given its current name in 1894 and is currently Grade Two Listed. Now something about the beer they sell. You will be relieved to learn that I am only going back to the year 2000 for this. In that year, the William IV pub at 816 High Road Leyton, opened a brewery in outbuildings of the pub at number 816A – the Sweet William Brewery. This operated for four years until it closed in 2004. In June 2008, the then owners of the pub, James and Lizzie Brodie, decided to clean up and restore the brewery and brewed the first batch of Brodies IPA on 8 August on that year. They have been brewing ever since. They love to try new recipes and – to date – have brewed over 150 different types of ales, several of which will be available at the Old Coffee House so I hope you will be able to make it on 16 May and don’t forget to have a couple for me!